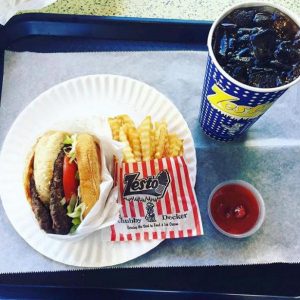 Stone Mountain native Donald Glover won accolades, including a Golden Globe, for his FX Networks show “Atlanta.” The TV show tells of a young father who teams up with his aspiring rapper cousin and his friend to make names for themselves in the city’s music industry. Much of the city is featured as background, especially the Bankhead area, located west of downtown Atlanta. Fans of the show will want to check out these Atlanta filming locations.

The Moreland Avenue location in Atlanta was used when Earn wants to order a kid’s meal, but the power tripping manager won’t allow it. Instead, he gets a cup for water and fills it with soda. The Zesto Drive-In is known for its vintage-inspired atmosphere, selling everything from ice cream to hot dogs to the “Chubby Decker” burger. Named for the Zest-O-Mat ice cream machines, the restaurant has been in operation in the city since 1949. Five of the original locations still exist, like the Little Five Points outpost that opened in 1967.

The Fundamentals of Caring
Baby Driver
Good Girls
How High 2

All of our Zesto Atlanta graphic images, website designs, logos, store and product photos and proprietary menu items such as the Chubby Decker character and burger, Fat Boy burger, Nut Brown Crown, Brown Crown and Burrito Brothers items are owned by and for the use of Zesto Chubby Decker, Inc.
© 2023 - Zesto Atlanta. All Rights Reserved.
Website Design by Harrison Morgan Design